Here (in no particular order) are five of the interesting mathematical objects I have gathered over the years. These ones come from three continents and are made of ceramic, wood, plastic and metal. 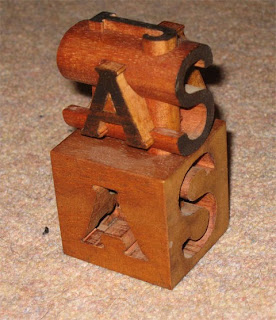 The late Kevin Holmes sold wooden puzzles at Covent Garden for many years.  These bespoke "Triple Initials" are solid cubes out of which three interlocking letters are carved.

Number Two - Three hares with only three ears between them 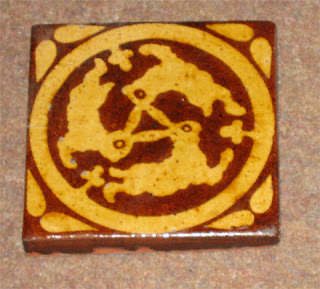 David Singmaster has traced the history of this motif - sometimes called the "Tinners' Rabbits", and in the UK particularly associated with Cornwall - to its origins in the far East, whence it spread along the Silk Road.

Number Three - a strange map of the UK 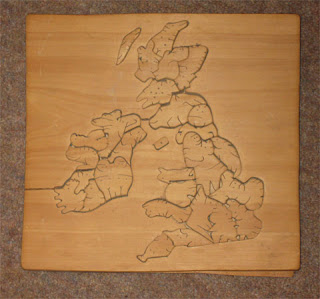 This wooden jigsaw map of Great Britain and Ireland has the remarkable property that every piece is in the form of characters from Alice in Wonderland.  A map of the UK based on a favourite British book - a wonderful present from my sister Rosie from her time in Jakarta! 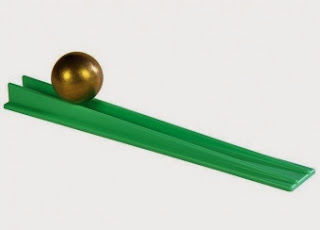 What is a "non-snail snail ball"?  Well, a snail ball is a cleverly constructed ball which rolls down a slope extremely slowly, contrary to our expectations.  I got one at Village Games in Camden Market many years ago. For an explanation, see this article by Stan Wagon.  The non-snail version looks and feels identical but doesn't have the "snail" property.  Mine came from www.grand-illusions.com (from whom I have lifted the picture). 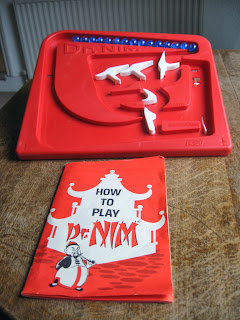 Dr. Nim is an amazing marble-powered machine from 1966 which plays perfectly a version of Nim's game. This was a wonderful Christmas present from Noel-Ann Bradshaw.
Posted by Tony at 20:41

Tony
I teach maths at a university in London.